The relationship between looking and listening and human emotions 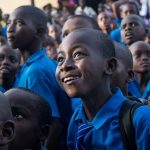